“In giving freedom to the slave, we assure freedom to the free – honorable alike in what we give and what we preserve. We shall nobly save, or meanly lose, the last, best hope of earth.” -Abraham Lincoln

“The Light of Freedom” features recreations of actual historical battles fought in the Civil War. Viewers and Civil War buffs alike will be intrigued as the battles of Phillipi, Rich Mountain and Corrick’s Ford come to life on screen. Filmed with the family in mind, both adults and children will learn interesting facts about Civil War life on the battlefield. 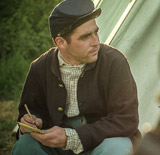 After Abraham Lincoln’s call for soldiers, Clay Dalton, an underground railroad conductor from Westerville, Ohio, joins the Union Army. We follow his time with the 14th Ohio Volunteer Infantry through the letters he sends back home to his brother, sister and Bishop William Hanby. 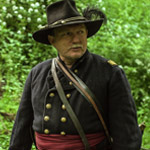 Led by Colonel Bob Minton of the Army of the Ohio, “The Light of Freedom” features Union and Confederate reenactors from all over the states of Ohio, Pennsylvania and New York. Along with the assistance of Joshua Mann and Mark Holbrook, Colonel Minton did a great job with the reenactors bringing the battles to life for the film.